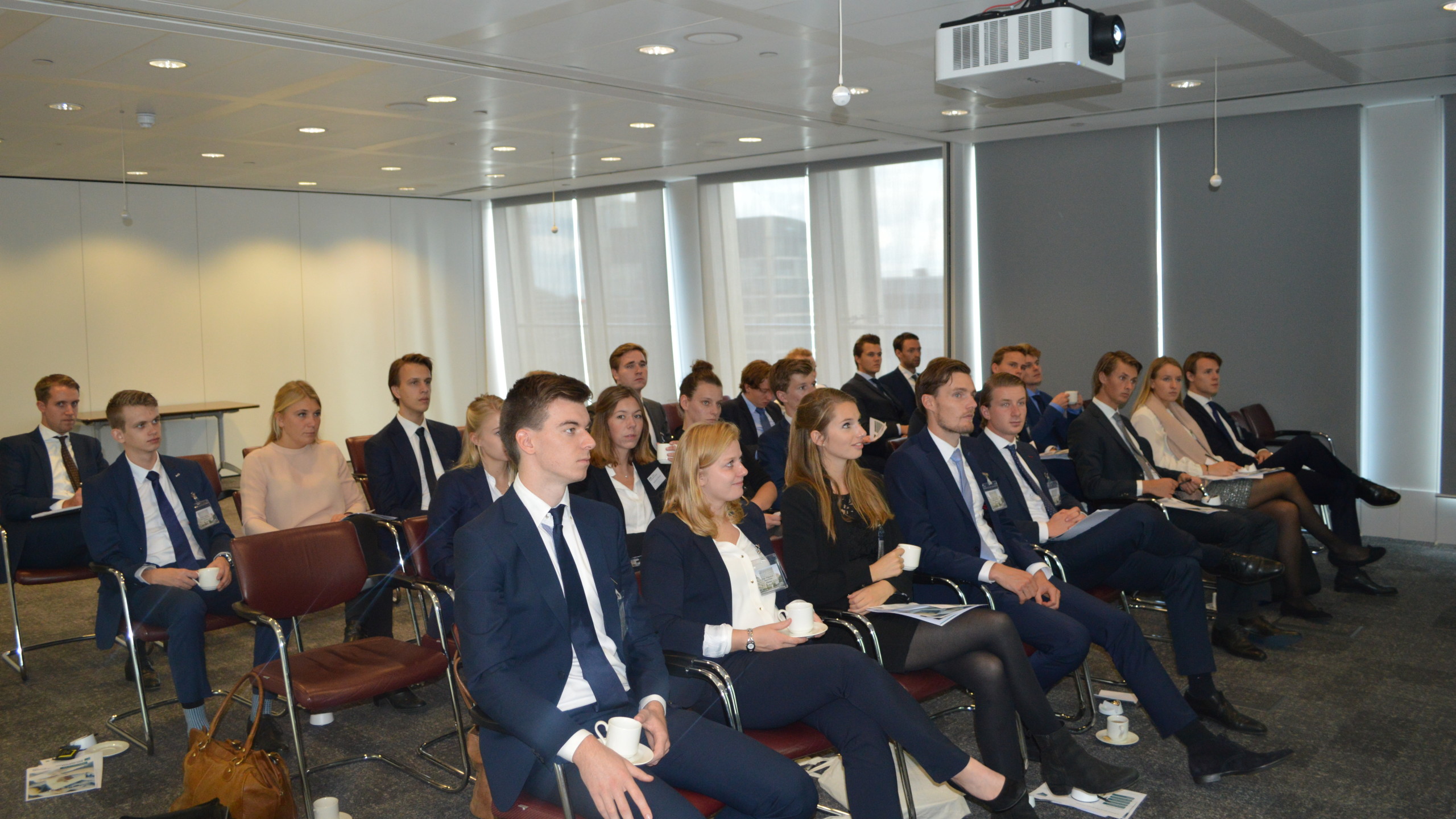 The concept of the London Banking tour is to meet as many financial institutions in a quasi-formal and professional setting as possible in three days. Those banks, insurance companies and financial advisories are visited by a group of twenty-five Dutch speaking ambitious students in the final stage of their studies.

Upon arrival in London the Lloyd’s insurance company took the honor of being our first visited entity. Lloyd’s has a rich history that began with maritime insurances in the 18th century. From there on it had built a dynamic platform where they brought brokers and underwriters together and provide insurance for very specific risks and assets. It was really impressive to see how this one of a kind concept seemed to work great. It’s worth to look up their interesting business model.

Second in line was the EIB (European Investment Bank). It is an almost non-profit organization with the – for now – twenty-eight members of the European Union as shareholders. This made us apparently their bosses as their capital is made up of a portion of our taxes. They had a lot of interesting programs to offer us. Half-year projects, GRAD-programs and more. The informative social afterwards made our participation worthwhile as we could ask a variety of questions from the employee’s career paths to the Brexit. Thereafter we had some spare time to experience London’s attractions such as the Eye, Big Ben and some other checklist material. Later that evening we had a cozy dinner and some drinks disguised as teambuilding.

Now feeling like a team and comfortable with the  banking environment, we arrived as a real unit of hands-on students at Mizuho. You likely are thinking, “Mi-what?” Mizuho is a Japanese bank with big plans. At the moment they are underwriting some of the most famous leveraged buyouts of this decade such as AB InBev. Their ambition is to grow their prominence outside of Asia and compete on the IPO market with the biggest US and UK banks. Here we were given our first case of the trip which focused on valuation and debt-financing in M&A which was structure after an actual deal they completed. The case was nice as we were broken up into smaller groups and given a Mizuho employee as a mentor for the case. Eventually our groups presented our results. In the end we were honestly impressed by their portfolio, the well-arranged welcome and the entire visit, in general, to Mizuho.

Within walking distance from Mizuho ,we arrived at BNP Paribas for our afternoon-program. An executive at the wealth-management department of BNP, who had earned some Risk-stripes himself, together with his colleagues shed some light on the newest trend in asset management, investing without a footprint. It means that you are doing good to the world, but still get some hard returns. A close partner with BNP called Impax, presented as well on how they choose companies to invest in based on an issue like human trafficking or deforestation. Afterwards we had chosen our new world-improving listed company to invest in and had to pitch it to the specialists. BNP also provided us with a social afterwards where we could have a drink and some snacks while picking the brains of the lecturers.

Unfortunately our time in London came to an end when we walked out of the impressive BNP-office. Overnight we were sailed back, harboring near Deloitte in Rotterdam. As we took some skills from our previous stops on the trip, our group approached our last M&A case with keenness. Afterwards, we were provided with a nice lunch where we could talk with current employees about their work life at Deloitte as well as enjoy the view of Rotterdam from the highest point in the Benelux region.

By the end of the amazing trip, we all had the feeling that we broadened our knowledge about financial institutions, learned some new skills and got handed multiple feasible job opportunities. After the rather intensive couple of days, we got on the train back to Groningen as one tired group of friends.

Written by the London Banking Committee