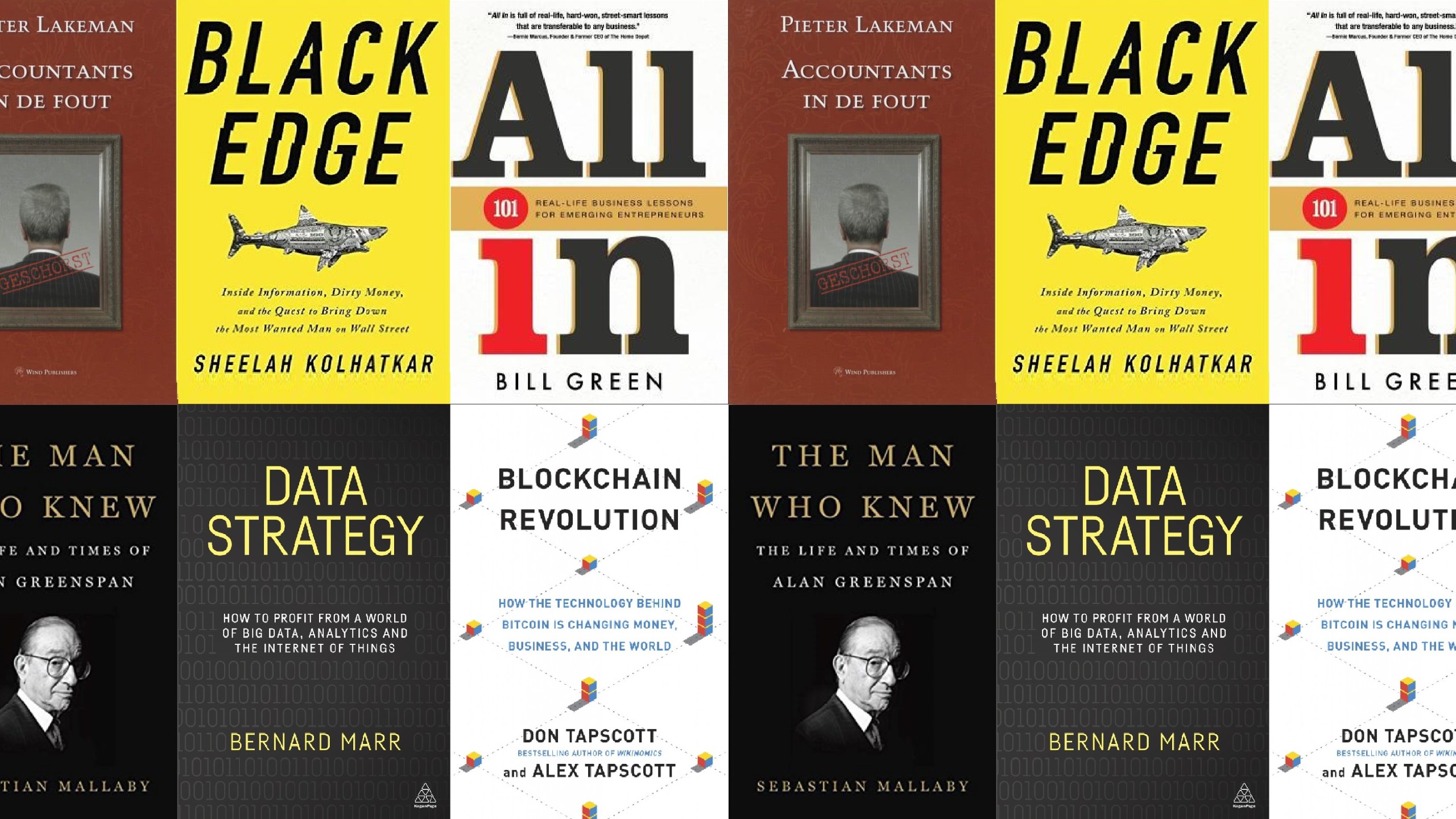 Wherever your holidays took or will soon take you (even if it's no further than Groningen), we have put together a list of must-read books for the financially oriented student to read during the last weeks of the holidays. Ranging from finance till Big Data, if you read about the different subjects you will be ahead of your fellow students at the start of the next academic year!

Finance: Black Edge: Inside Information, Dirty Money, and the Quest to Bring Down the Most Wanted Man on Wall Street – Sheelah Kolhakar
The story of a billionaire hedge fund manager Steven A. Cohen’s rise and fall. In the last decades finance billionaires made their money through speculation, a way of working which was totally different from their predecessors. Cohen was one of the industry’s greatest success stories. However, the culture of these companies encouraged trading on the ‘edge’. This is where the book provides an interesting look inside the modern Wall Street culture.

“The book is a richly reported, entertaining tale about the cat-and-mouse game between the government and Cohen”. Those of you who liked television drama series 'Billions' will surely love this book!

For those of you who like the TV-Series Billions will surely love this book!

Accountancy: Accountants in de Fout – Pieter Lakeman*
Hundreds of thousands of small and medium-sized enterprises are dealing with accountants in The Netherlands. Those accountants happen to make mistakes, sometimes by accidence and sometimes on purpose.

“Accountants in de Fout” gives an overview of dozens of disciplinary jurisdiction decisions against accountants and provides comments on these verdicts. The cases go from companies like Ahold to life insurer Vie d’Or. By using those court decisions, Lakeman provides solutions to prevent future mistakes from happening.

Highly interesting and easy-to-read, without complicated legal terms, which gives a good image about the potential mistakes accountants can make.

Investing: Blockchain Revolution - Alex Tapscott
In the past year, cryptocurrencies have reached the interest of people far beyond the Chinese and Russian programmers. Nowadays, also the general trading society holds large funds in these kind of investment opportunities. Bitcoin will create a shift of the paradigm as there are lots of opportunities, but the risk of disruption cannot be ignored.

No book explains the next big thing better than Tapscotts's Blockchain Revolution. It adresses the changing technology, increasing costs of products and the possible solutions bitcoin can offer, all of this in an accessible book. Read it or be left behind!

We also wrote about the cryptocurrency Ethereum before, you can read it here.

Entrpreneurship: All In – Bill Green
You want to be an entrepreneur. You have analyzed the market and did all other research. You want to be highly successful. Apps like Instagram and Snapchat make the ‘entrepreneur life’ look quite easy. But how are you going to be that successful and how have other entrepreneurs done this before you?

Long time entrepreneur Bill Green shares 101 key insights that have helped him to become an extremely successful entrepreneur. He started with a start-up and became the founder of a publicly traded company. “He wants to inspire entrepreneurs of all ages and levels to take up the challenge of building a business with passion and joy”.

If you want to be disruptive, you have to be able to spot shifting trends in your industry.

Economics: The Man Who Knew: The Life and Times of Alan Greenspan – Sebastian Mallaby
Alan Greenspan, an American economist, served as the Chairman of the Federal Reserve of the United states from 1987 to 2006. His life was known as a typical American success story, raised by a single mom, often being called the maestro for his knowledge and astonishing career path. But that was until 2008. Ever since the crisis the man has been one to be blamed for the financial crisis. Was he really that naive to believe that more regulation was unnecessary? Mallaby argues that he wasn’t an ideologist, had pressed for more regulation in some of the key areas during his period at the Fed and knew more than almost anyone. He knew all too well how fragile the financial system was.

The question this book answers is why he didn’t act, or anyone could or would have in his position. It will provide you with some of the key lessons on economic statesmanship and the difficulty Greenspan had from always being a side person to having to act solo at the Fed.

Big Data: Data Strategy: How to Profit from a World of Big Data, Analytics and the Internet of Things – Bernard Marr
For many of us Big Data seems something too complex to understand, especially among the less beta oriented people. That is visible in the numbers: less than 0.5 percent of all data is currently being analysed and used. However, data is revolutionizing the market and companies that view data as a strategic asset will have a huge advantage.

Bernard Marr has been able to create a must-have guide in creating a solid data strategy which is easily understandable. He shows us that Big Data, analytics, and other technologies can be a source of profit for many companies and packed with real-world examples and case studies, the writer shows you the importance of building a data-driven business that excels in today’s economy.

*Unfortunately this book is only available in Dutch.