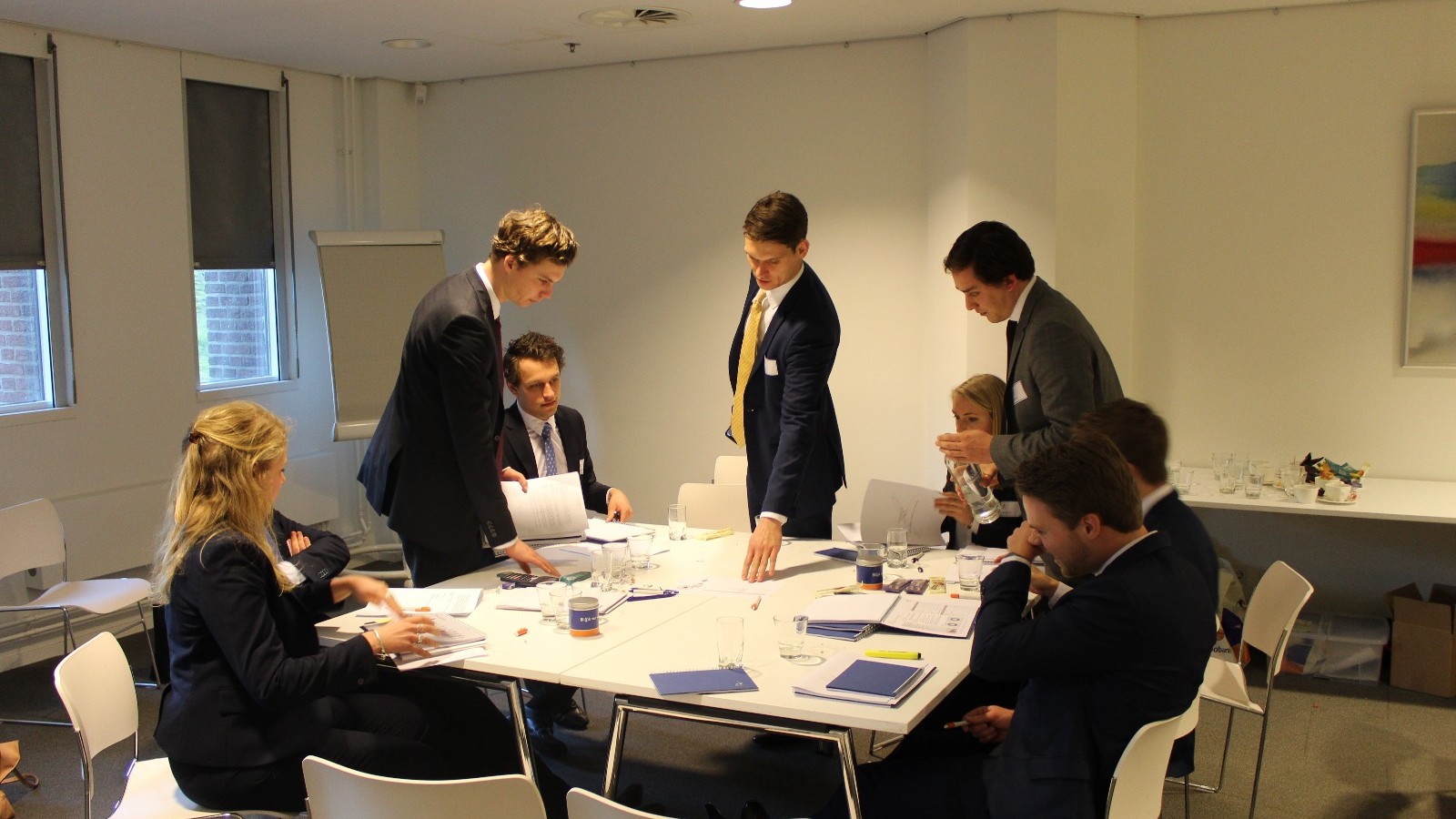 It has been almost two weeks since the Dutch Banking Tour started. During this three day inhousetour, 25 top cv-selected students visited six financial institutions in the Amsterdam area. In order to refresh everybody’s  knowledge on valuation and for the participants to meet each other, an valuation workshop was organized on Thursday the 1st of March. The workshop, provided by Lindenaar & Co, was concluded with a nice dinner and some drinks in the city centre.

On Sunday evening, we left Groningen for Amsterdam, and we went to our hotel. After a beer at the bar next doors we went to sleep on time to make sure everybody was awake bright and early the next morning!

Monday
After an early wake-up call and nice breakfast, we left our hotel and travelled to the ABN AMRO headquarters at the Amsterdam Zuidas. We were welcomed in their pavilion, called the CIRCL building. Interesting fact is that this building is built completely circulair and thus very sustainable. After an introduction about ABN AMRO and the opportunities for the participants, given by four trainees, we got to work on an interesting case on Capital Structuring. Every group presented their outcomes in front of a jury of two from the Debt Capital department. The winning group was rewarded with a nice bottle of champagne. Afterwards, the participants got the opportunity to meet some ABN employees while enjoying a vegetarian lunch.

After preparing the case, we started the negotiations, which led to some pretty heated situations.

Then, the group took of to Utrecht in order to visit the headquarters of Rabobank. Once there, we got welcomed by three young starters from the Debt Equity Capital and Mergers and Acquisitions department. We first started off with an introductory presentation and worked on an interactive acquisition case. Groups were divided into selling and buying parties and had to come up with a price, based on a peer valuation. After preparing the case, we started the negotiations, which led to some pretty heated situations. Hereafter, the winning team was announced and we went for drinks and snacks in ‘het Bruine Café’ of the Rabobank.

Tuesday
Our Tuesday started early, breakfast was served at 07:00. The first bank we were going to visit was ING. The group took off to the Bijlmer, where ING has several offices. We had a little introduction about the bank, followed-up by a presentation on funds. However, the case we got to work on was about innovation in banking. The students were divided into groups and had to come up with an idea for a startup. An interesting and refreshing topic!  We closed our morning at ING with a lunch and a Q&A session with trainees.

After going through a security check, we got welcomed in the prestigious ‘Presidenten zaal’.

In the afternoon we took the metro to the city centre of Amsterdam and we visited the office of De Nederlandsche Bank , which is the Dutch Central Bank. Different from commercial banks, this bank is focussed on monetary policy and financial stability.  After going through a security check, we got welcomed in the prestigious ‘Presidenten zaal’. Four trainees introduced us to the DNB and the economic case on Quantitative Easing. The students got divided into five groups to work on this interactive case. The students had to simulate a meeting at DNB, thereafter all groups pitched a scenario on how to continue the policy on quantitative easing. We concluded the day with a social where the students got to meet employees of DNB while enjoying a refreshing beer.

Wednesday
This was already the last day of our tour! On Wednesday’s schedule we had two banks to visit: Van Lanschot Kempen and Duff & Phelps. In the morning we went to Van Lanschot Kempen at the Amsterdam Zuidas. In the past year, financial service providers Van Lanschot and Kempen & Co merged into one independent financial institution focussed on private investors. Once there, the group got introduced to the organization and was shown the dynamics at the trading floor of the bank. After this interesting tour, we got to work on an investment game. Based on economic news articles, the students had to create a portfolio based on risk and return. The goal was to achieve the highest return/risk ratio. After three rounds, the winners were announced and we closed our morning at Van Lanschot Kempen with a lunch together with employees.

By means of a DCF and peer group analysis the students had to come up with a bidding range for a company.

For our last visit, we took of to the Rembrandt Tower at the Amsterdam Amstel, in order to visit Duff & Phelps. This American company is well known for doing complicated valuations and is regarded as one of the best firms in this field. The Duff & Phelps office was situated at the 20th floor of the building, so we all got to enjoy a nice view as well! Once there, the Managing Director of Duff & Phelps Netherlands introduced the organization. Hereafter, we got to work on a challenging case about valuation. By means of a DCF and peer group analysis the students had to come up with a bidding range for a company. Finally, the groups had to present their bid. Hereafter, we got rewarded for our efforts with some drinks and snacks at a restaurant close from the office.

After the last company visit, it was time to head back to Groningen! All students were pretty exhausted from the intensive, but interesting tour. We hope all students learned a lot, got more insights into their future career and made useful connections!