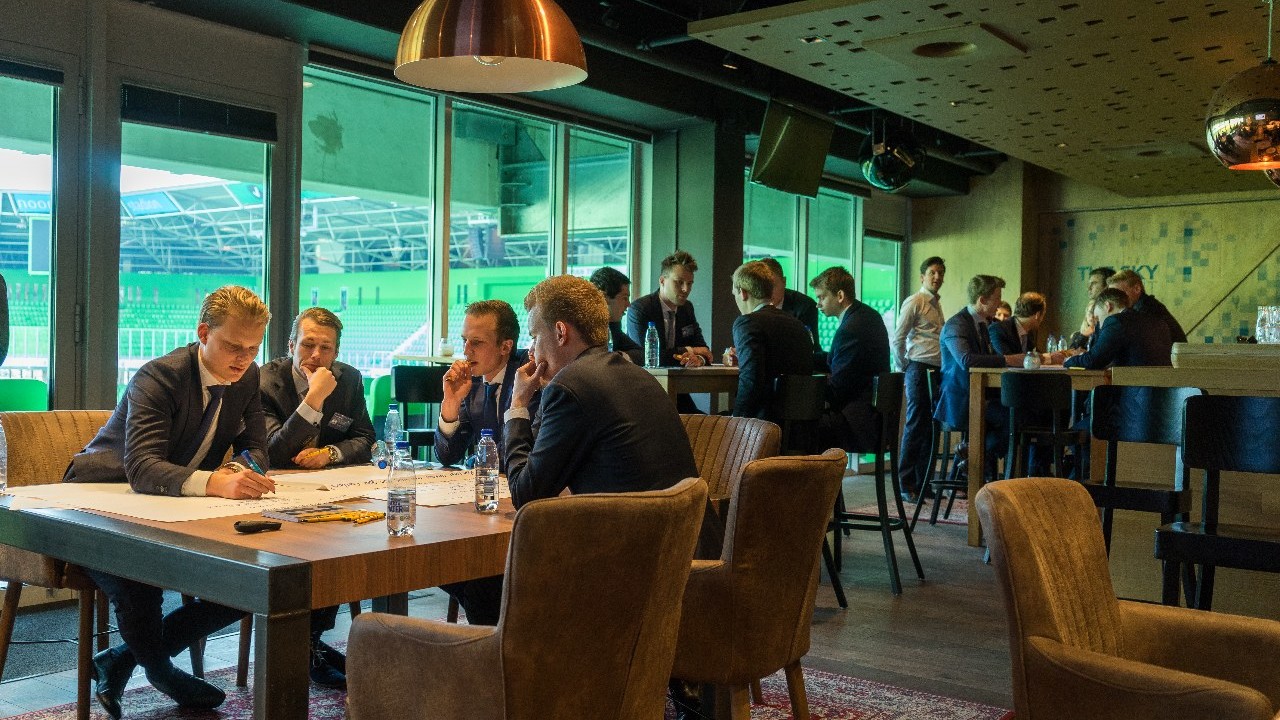 In the early morning of the 21st of February 2018, the Noordlease stadium opened their doors for the Risk Conference. Students, business participants, speakers, university staff, partners and others geared up in their nicest suit to experience a day full of lectures, cases and drinks at the Noordlease Stadium. The main theme of the day was: “New Financial Focus, What Are the Odds of Surviving”. The theme served as a guideline during the day where a lot of insights and new knowledge were shared.

New Financial Focus, What Are the Odds of Surviving?

Let’s not rush to the end too fast, when entering the Noordlease Stadium everyone was welcomed by the organization and they were told what the day had in store for them. They would finally find out which workshop they were placed in and whether they were invited for a business lunch or dinner. After storing their coats, it was time for the participants to wake up with some caffeine for the first round of speakers.

Then everyone was asked to join the speakers in the cinema where kick off of the day was done by Irma Ridder, Chairwoman of the Risk Conference Committee 2018 who welcomed everyone and introduced the room to the chairman of the day, Rick van der Kleij. He warmed up the audience by interviewing a few participants.

Rick van der Kleij gave the floor to Bert Albers, Managing Partner of Audit and Assurance at Deloitte. Bert Albers was a perfect fit to talk about the odds of surviving of the external audit practise. Bert Albers started his speech by asking the audience to comment on the following: “The increased interconnectivity and speed at which information becomes transparent makes the external audit obsolete”. The audience held down their hands indicating that they did believe that external audit would have a place in future world of business. The message of his speech was that although cloud accounting bears risks, it also leads to innovating in the practise of external audit.

Companies should, next to making profit, be cautious of their role in society.

Next was Hans de Boer, president of VNO-NCW, who spoke about the probability of surviving of companies given their responsibilities to society. As Hans de Boer mentioned: “Cash is not always king ladies and gentleman.” His message showed that companies should, next to making profit, be cautious of their role in society. This is the way forward and it increases companies’ odds of survival, he explained that companies are getting involved in the new ways of doing business. He urged the audience, which he called the future leaders of tomorrow, to step up and join the silent revolution of change to make this world a better place for all of us.

After these two interesting talks, which convinced us that the world is moving in the right direction, there was a small coffee break. People shared their experiences on the lectures. Meanwhile, Matthijs Vink was getting ready to share his experiences regarding survival in the mergers and acquisition market.

To make sure that a merger or an acquisition deal comes out on top, companies must have a clear strategy, have room for reflection and hire the best young talented people.

Matthijs Vink is a partner at Emendo Capital. He showed that important developments can have a impact on the world in no time. Companies who do not adapt to these developments can see their relevance decline rapidly. He showed that in the current and future financial world, M&A will lead to very successful and very disappointing deals. To make sure that a merger or an acquisition deal comes out on top, he urges, amongst others, companies to have a clear strategy, have room for reflection and to hire the best young talented people, like the students in the room.

After a morning full of knowledge, it was time for a lunch break. During the lunch break, participants had the opportunity to get a professional photo taken, to have their LinkedIn and CV checked by Fit Professionals and to let them be advised on their business formal looks by Royal Suits. During the lunch Deloitte, Albert Heijn, Belastingsdienst, BNP Paribas and EY had a private lunch with selected students to get to know one another.

After all participants gained some new energy, it was time to dive into the workshops. The workshops were hosted by our partners who took the time to come to Groningen and to get to know the students. Also, the students got to know the companies by diving into day-to-day case studies. Our workshop partners were: Deloitte, Accuracy, Albert Heijn, Belastingdienst, EY, PwC, and Solid Professionals. Students described various workshops as: “Schittermagisch” (red. Magnificent) and “Insightful”.

In the Investment Game, three start-ups presented their business model with the goal to receive the fictional amount of €100.000.

Kees Hoving stressed that students should take a job that you love and find interesting.

After a short break, it was time to listen to the last three speakers of the day in the form of a debate. The topic of the debate was “banking without bankers” a topic which relates to the future of the banking sector. Three leading people from the banking sector participated in the discussion, these where: Petra van Hoeken, CRO of Rabobank; Kees Hoving, CEO of Deutsche Bank; and Reinout van Riel, CRO of NIBC. Questions such as, who are the future competitors in the banking sector, how does your bank remain relevant in the future, and how can trust in banking sector be restored were discussed. In addition, questions from the working field were asked by the use of video fragments. At the end of the debate, each banker gave the students advice for their future study career. For example, Kees Hoving stressed that students should take a job that you love and find interesting.

Considering the whole day, including speakers, workshops/investment game and lunches, you might notice that something is missing on this list, naturally, some drinks. First a social took place at the Noordlease stadium. After approximately an hour, 125 students went to Louis XV, to collectively enjoy a three course dinner. In addition, 30 students went to ‘t Feithhuis for a business dinner, in order to get in touch with Deloitte, Rabobank or Solid Professionals. When the dinners came to an end, the day could be considered as over. However, the night just started. A large amount of students went to ‘t Vaatje to enjoy the after party, which was a great (and legendary) way to end the Risk Conference.

In April 2018, the applications for the Risk Conference Committee 2019 will  open. Make sure you check out riskgroningen.nl for more information and on how to apply.