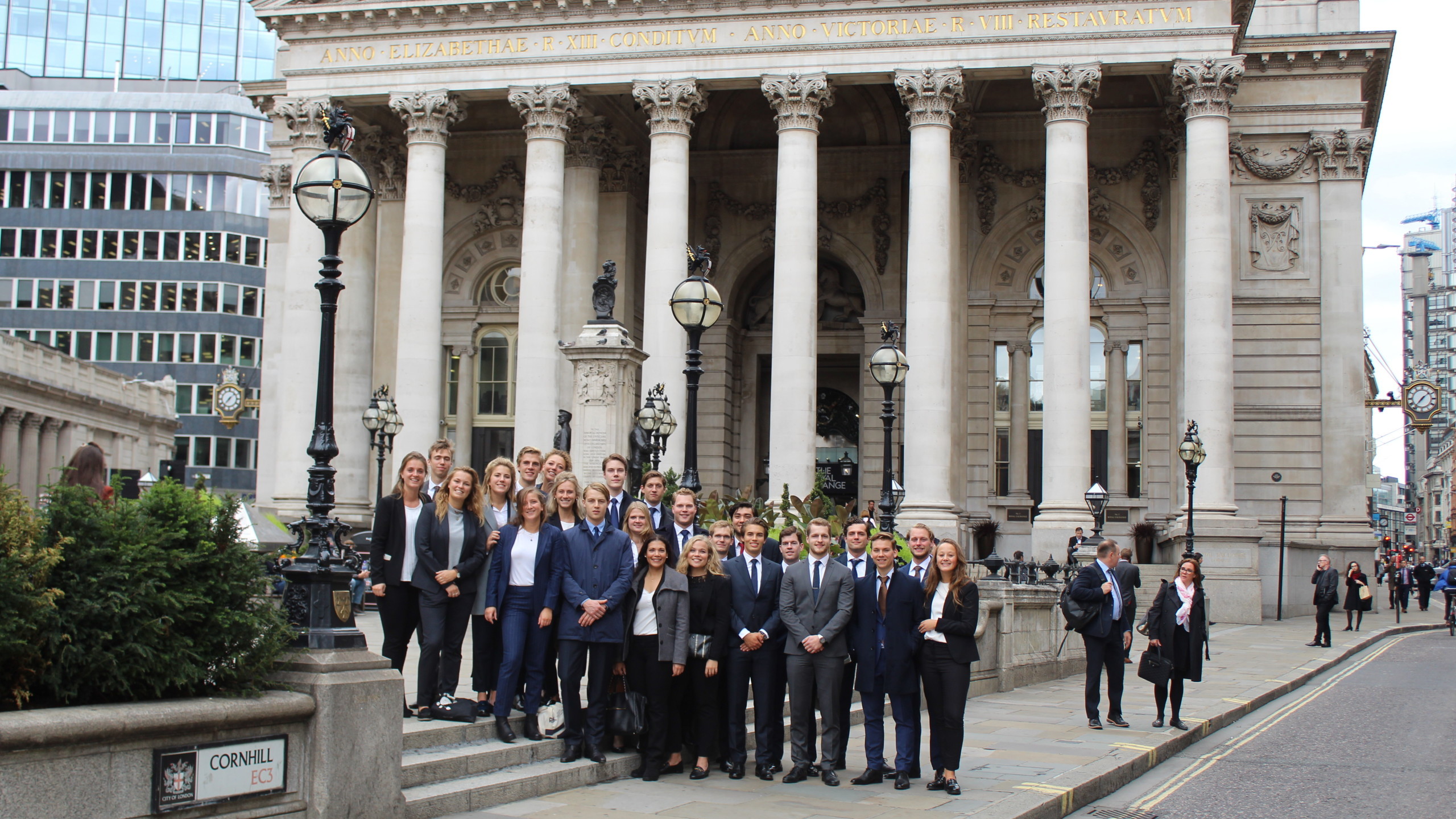 The concept of the London Banking Tour is to provide an experience as prominent as the name makes it out to be. With this goal in mind we set out on a three day in-house tour among five financial institutions in the financial capital of the world. Accompanied by 25 excellent and ambitious students aspiring a career in finance, we arrived at Canary Wharf on Monday. In awe of the structures around us, which left us both speechless and filled with excitement, we arrived at our first host: Morgan Stanley.

While the majority of the group was still processing the immensity of the environment around us, it was time to get warmed up for the Tour. Morgan Stanley’s office is carefully located besides its brother: J.P. Morgan from which it stems as of September 16, 1935, in response to a regulatory reform which required the splitting of commercial and investment banking. Nowadays, Morgan Stanley is among the top players in the bulge market of investment banking firms, providing a variety of financial advisory services. Our hosts introduced us to the workings within the bank, career opportunities and valuable tips on how to prepare yourself for investment banking interviews. After this we had an informal meeting with the Benelux team during which we could ask all sorts of questions to get a better understanding of investment banking.

Our main host used to work for Lehman Brothers in 2008, which gave rise to a lot of curiosity amongst the participants resulting in many questions.

The tour continued on Tuesday with a visit to another American investment banking firm: Jefferies. At first, the majority had never heard of the firm but it quickly became clear that it was another big player in the financial advisory services industry. We were welcomed by a team who had recently started working for Jefferies after making a switch from Deutsche Bank. This provided an interesting outlook on the dynamics within a smaller middle market firm in contrast to a large bulge market investment bank. The presentation, given by various employees, focused on all activity within the bank and not necessarily on M&A which we had seen at Morgan Stanley. This gave the students important insights which might prove useful in future career decisions. Moreover, our main host used to work for Lehman Brothers in 2008, which gave rise to a lot of curiosity amongst the participants resulting in many questions. Afterwards, we were joined by other Jefferies employees to ask any other questions we had left over a cup of coffee and a luxurious lunch. It was an excellent visit, lending a lot of important insights and even though most of us could have stayed there all day, we had a tight schedule to adhere to.

The European Investment Bank (EIB) was our next stop. Headquartered in Luxembourg, the EIB is a non-profit oriented financial lender owned by member states of the European Union as shareholders. In large contrast to the other financial institutions we visited so far, the EIB promotes career opportunities which are vastly different in terms of clients, industries and workings within the firm related to company culture. The presentation was followed by a quick case study during which students had to pitch whether to invest or not to invest in a certain project. This gave a much clearer insight into the bank’s overall activities in contrast to the other banks we had already seen.

After a tiring, but more importantly very exciting day, we had the evening to ourselves to relax and let the all new experiences settle in. After an hour of spare time the group met up at a restaurant for a nice dinner and discussion about the day. Afterwards, we returned back to the hotel for a couple of well-earned hours of sleep.

A traditional British morning tea enabled the students to ask any questions they had, and to ask employees about their career paths.

We headed out early in the morning for our final day in London with our final two visits. After a quick stroll through the London streets, we arrived on the premise of Rothschild & Co for a meeting with the Benelux team. The firm notorious for various theories concerning the amount of wealth they would manage did not fail to impress. We were welcomed in, by far, the most notable office of the tour. We were given a presentation which gave us a clear insight into how this bank has grown to what it is today. A traditional British morning tea enabled the students to ask any questions they had, and to ask employees about their career paths. The team also guided us in small groups around the floor, where various Rothschild artifacts were displayed. Even though most of never wanted to leave this impressive building, we had a tight schedule which required us to move on towards the next office.

We were welcomed in a very impressive traditional building of Child&Co bank to host the event.

The final bank which finalized the tour was NatWest Markets, this bank is the investment banking arm of the better known Royal Bank of Scotland Group. We were welcomed in a very impressive traditional building of Child&Co bank to host the event. The program started with presentations by employees from various departments within the firm highlighting their specific field of work. After the presentations concluded, there was some time for a quick Q&A session with some employees after which we were divided into groups to dive into an interesting case study. After an hour each group presented their findings providing interesting insights into how each group took on the challenge. The program was finalized after networking drinks and snacks with some NatWest Markets employees.

Unfortunately, we had to leave for our journey back home and our London experience had come to an end. The participants were processing the experience of the last few days and dreaming of a career in London. The London Banking Tour provided excellent insights into the various career opportunities in the City ranging from working at a bulge market firm, a middle market firm to a non-profit company. We arrived back in Groningen enriched by new experiences, new friends and new career wishes.