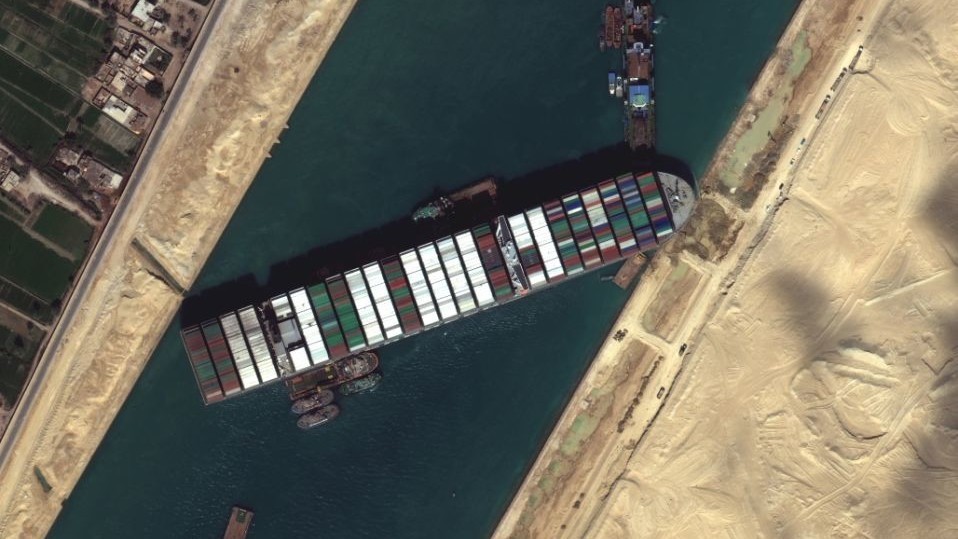 What’s Going on in the Suez Canal?

All the major news outlets have been talking about the Suez Canal crisis for days now. So, what is going on in one of the busiest trading routes and in the world and what are the effects of this on the already-strained global economy and supply chain? This article gives insight into the magnitude of the issue at hand.

Evergreen container ship – the length of the Empire State Building’s height, and weighing 220,000 tones – has been horizontally jammed at the entrance of one of the busiest trading routes in the world since Thursday, March 25. The waterway is the main route for sea transportation of large container goods between Asia and Europe.

An estimated 12% of global water-trade volume passes through the canal per year. According to Lloyd’s List, this is costing the global economy a staggering $9.6 bln per day, equivalently, about $400 mln per hour. This comes at a time when global supply chains are under scrutiny for pandemic-related shortages and are becoming increasingly stretched thin.

Business Insider estimates that around 93  ships pass through the canal per day, meaning that there are now around 400 vessels already blocked in the Gulf of Suez

As you can see from the satellite images below, the left image was taken on March 21st, 2021 and the one on the right was taken on March 25th, 2021. Obviously the number of ships waiting in the Gulf of Suez on March 25th far outnumbers the number of ships waiting just a few days beforehand. What also goes to show busy the canal is, the picture on the right was literally taken hours after the blockage of the canal. The image also shows where exactly the container ship, Ever Given, is stuck within the waterway.

Ships have already started to reroute through the Cape of Good Hope, which increases risk, money, and time for all parties involved. The Dutch and Japanese expert rescue teams are battling to fix the situation, but it is being reported that it could take weeks to dislodge the ship and clear the canal. By then, consumers around the world will have definitely started to feel the impacts of the crisis.

Business Insider reports that the jam could cause global shortages in the following items: toilet paper, coffee, furniture, and other imported goods. According to David Fyfe, the chief economist at Argus Media, about 5% to 10% of global oil shipments pass through the canal. Gas prices were already on the rise recently, as well as the OPEC’s delay in boosting production; hence, it is expected that oil prices will surge even higher with this crisis.

According to Ngaire Woods, professor of global economic governance at Oxford University, “global supply chains are facing three different pressures that are worth thinking about:”

The Captain of the container ship, Karan Vir Bhatia, underlies the difficulties of the job saying, “It’s a stressful job for the captain and crew. It’s not a car, it’s a 230-meter floating island.”

Overall, this crisis has emphasized and exposed the fragility and vulnerability of the global supply chain. It seems like this situation is here to stay for at least a few weeks and it also seems probable that consumers will soon start to feel the impact at their local grocery store.